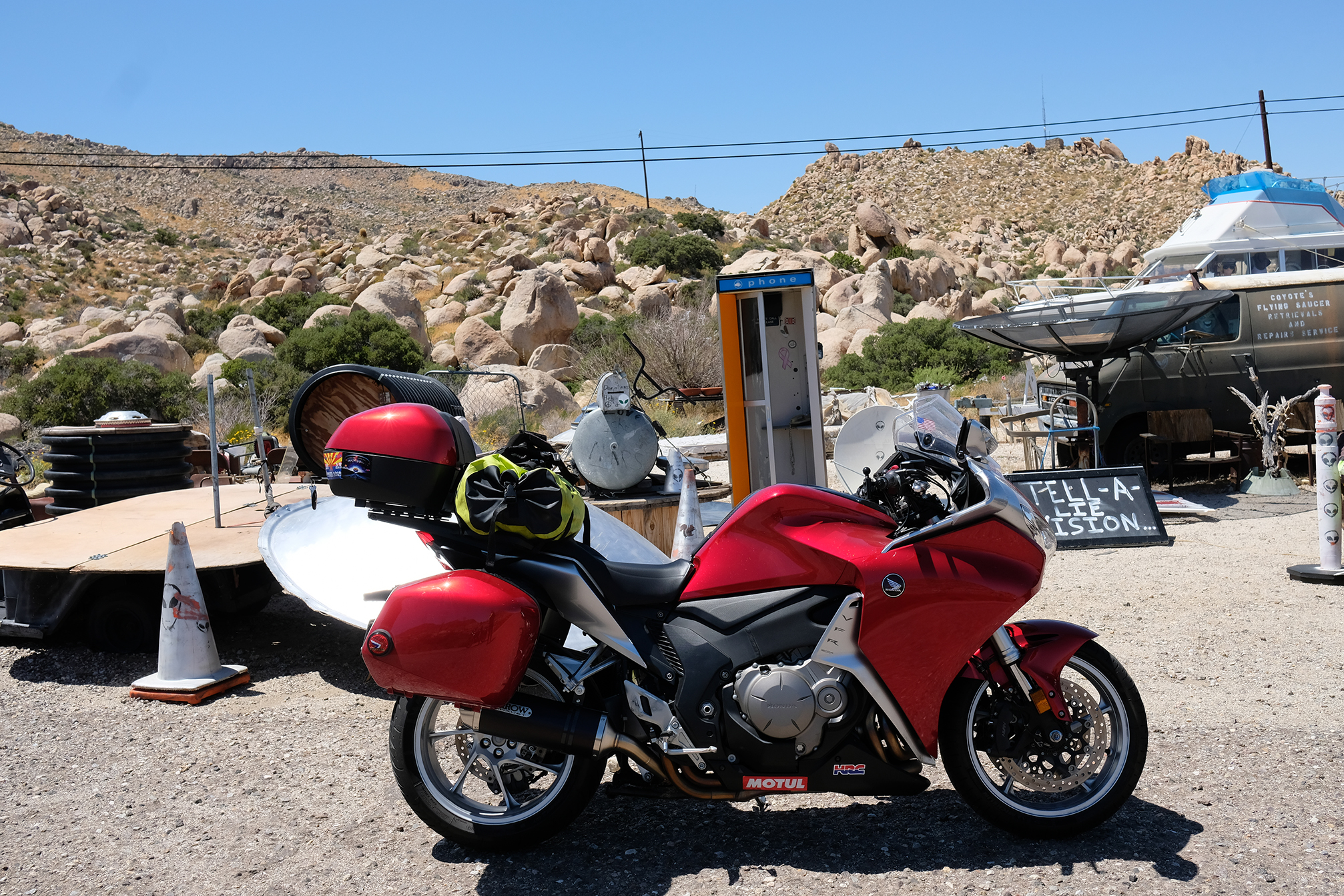 Planning for the Alien Encounters tour starts about a year ago when California AZRATPacker, Darlene Fong sent me a couple of interesting links she found while looking up alien themed places to visit.  The first was Coyote’s Flying Saucer Repair in Ocotillo, CA and the second was the Integretron in Landers.  Loving the two suggestions for stopping points on a future ride, I started to formulate a route to tie the two together.  I then added a trip through Death Valley and El Chino Loco suggested the Atomic Inn in Beatty, NV as a stop for the night.  Behold, the Alien Encounters Grand Tour was born!

In my opinion, this is the best of our annual alien themed rides!  You can’t beat the roads, goofy alien themed attractions to stop at or the opportunities for us to hang out and have a good time!

Day one started bright and early at GO AZ Motorcycles Peoria.  After a rider’s meeting, we headed west towards Buckeye, AZ and then to Yuma on I-8.  After an extended gas stop, where some of us had lunch and some headed out to see the Atomic Cannons, we continued west into California.  Once we started climbing the mountains in the San Diego area, we stopped in Ocotillo at Coyote’s Flying Saucer Repair.  What a goofy place!  Just a bunch of random junk, including flying saucers and related parts lying around.  Imagine Sanford & Son’s front yard junkyard, but with alien transportation devices and the odd political statements.  We also used this spot as a remote start location for people joining us from California.  After visiting Coyote’s, we then headed north through Alpine and Julian.  All great roads!  We then got on the Pines to Palms Highway where we descended on our stop for the night in Palm Desert.  We had dinner that evening at Eureka!  Since we had so many people on this ride, we all had to break up into small groups in order for the restaurant to seat us all.

The second day started with Dean Sirrocco winning the 50/50.  Congrats Dean!  We then headed north towards Landers and made a stop at the Integretron.  None of us were able to get a sound healing therapy session because they were booked months in advance but it was a nice stop for some photo ops and to check out the building whose architect came up with the design because of alien telepathy.  Next stop was in Baker for a quick lunch and a visit to Alien Fresh Jerky.  The jerky is out of this world and with a quick walk around you can see that theres a walk up restaurant coming along with an Alien themed hotel.  After gassing up, we proceeded to head into Death Valley.  This was my first visit and have to say that I’ve never seen anything quite like it!  Known as the hottest place on earth, Death Valley did not disappoint!  I saw a high of 105 degrees on the Honda’s thermometer.  The scenery on road at the bottom, along the lake was like riding on Mars!  The greenish red rocks along the side of the road, the tall rock formations in the background and the cement-like salt on the lake looked like all of the photos of the red planet I’ve seen.  After a hot gas stop, I decided to take the group straight to the hotel in Beatty while cutting out our visit to Jedi Canyon.  This took about 2 hours off of our day, getting everyone to their hotels early enough to freshen up, cool off and relax.  We all then met up in town to grab a bite to eat along with some adult beverages and a bit of bench racing and tales of the day.

On Sunday, most of us went home to the Phoenix area and SoCal, but a few of us took a short ride to Las Vegas to spend the day and night on Freemont Street.  Our small group had a great time celebrating Cinco de Mayo with some Mexican food for dinner and some Mexican “refreshments” while taking in the “sites” on Freemont Street.

Our 6th Annual Alien Tour was a success and this iteration will be back on the schedule in a couple of years.  In the meantime, we’re going back to Area 51 next year!  See you then!