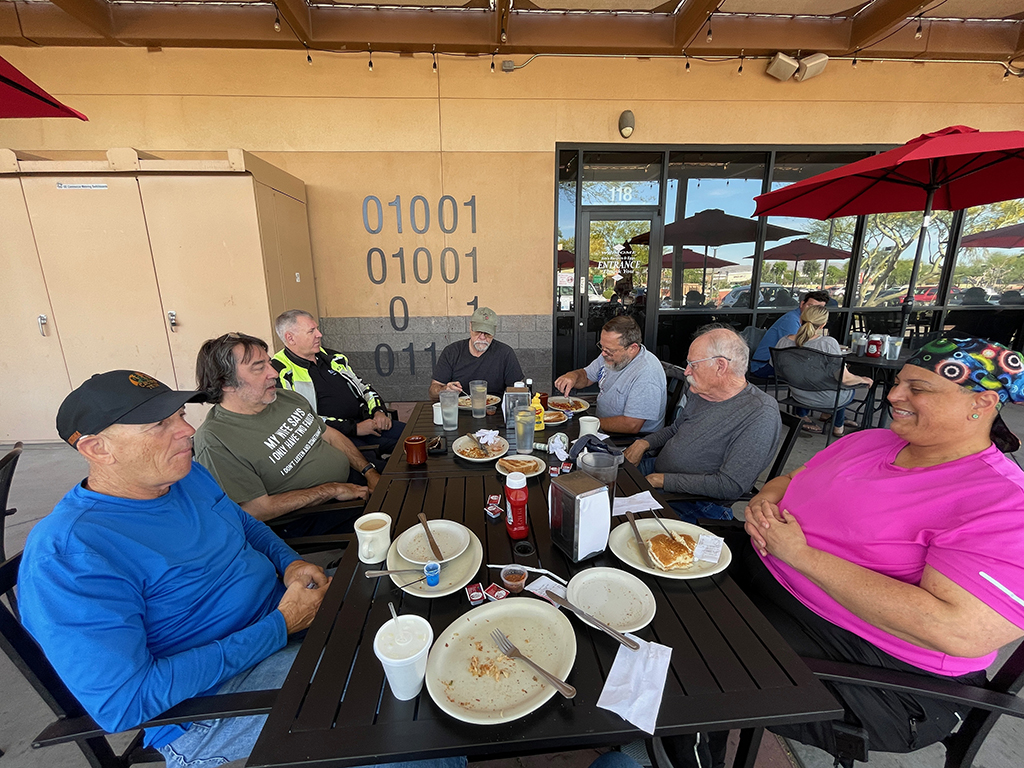 After a late night out with a few drinks, it was a difficult task to roll out of bed this morning to head over to Surprise to Jim’s Burgers & Eggs. Normally, I probably would have slept in, but since the chair of this event, Dean is off to the SCMA gathering in Rocky Point with a few others, I stepped up to be the point person for this morning’s breakfast. So, I needed to be there!

After rolling my bike out of the garage to start the easy 15 minute trek up the Loop 303, I discovered that it was an awfully pleasant morning! Sunny as always but with temperatures in the mid 60’s. The calm before the storm of triple digit temperatures coming later in the day!

Jim’s Burgers & Eggs is set up where you order at the counter then take a number and then sit down where someone will bring your food to right to the table. We had a nice turnout of about 10 of us. It was good to see everyone as this was the first breakfast that I’ve attended this year. Concerns of the layoffs at Carvana, where I work were greatly appreciated and for the record, I’ve survived for the moment!

Choosing something from the menu was a little bit of a daunting task for me since there were so many things that I liked to choose from. I settled for a Denver Omelet with hash browns and toast. Turns out I made a great choice as it tasted great and was the perfect portion size so that I didn’t feel still hungry or like I needed to be rolled out in a wheel barrow.

It was great to see everyone this morning as it was to get out on the bike! Sorry I was a little sleepy this morning, but hey, I don’t bounce back like I used to! See you all at the end of the month for some great Cuban food!