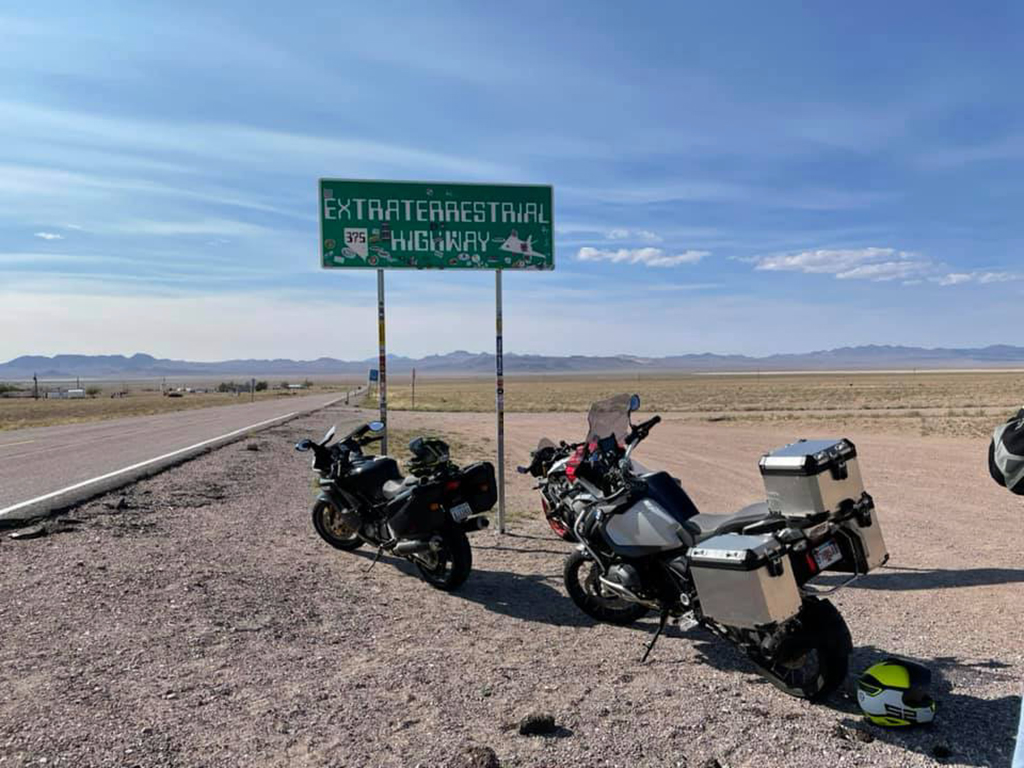 Star Date 20210917, 30 of us are at Starbase GO AZ Scottsdale to start the voyage to the secretive Star Base Area 51.  This journey entails traveling through a variety of space controlled by many factions and indigenous peoples.  Travelers from the Southern California Motorcycle Association (SCMA FACTION) have come to travel with us. We later learned their leader Mark Burdick from the Houston Space port joined us.  Thank you for expending your anti-matter to come travel with us.

We gathered to discuss the mission and the areas of space that might present some challenge. A review of the route was performed and navigational systems were discussed.  This years route took 3 days to travel.  The start was at Star Base GO AZ to regional space port PAGE in the AZ region of space. Day 2 destination is Star Base Area 51, with the spaceport of Rachel the stop. After visiting spaceport Rachel wee headed to the Las Vegas solar system to stop at Las Vegas Megaplex.

The first day of the trip was approximately 250 parsecs (parsec – some measurement based on light speed, horse go home speed and solar units), an easy day for most… Some decided that other routes threw space offered some better views and went through Payton space and Prescott space. We all met at the Cameron comfort station.  Cameron is in the Navajo (Nav-ah-hoo) controlled region of space). This unique place offered mysterious wares and dining options.  Some even had Navaho Fry Bread said to be cooked by intense solar radiation.

After enjoying this stop and refueling the plasma engines it was off the the PAGE spaceport near the Lake Powell nebula. Only a short 120 parsec a little boost of speed put us in the mid-afternoon.  After settling into the space docks a pool party was held to help unwind from the high G travel on the first day… Dinner was held at a restaurant next the space docks, serving numerous Japanese and American dishes.

Day 2, 7am the group began heading out of PAGE spaceport to Star Base Area 51.  This days journey offered options to see the mysterious nebulas of Jacobs Lake  or a less parsec route threw a region of space called Colorado City.  All participants would pass through regions, Hurricane, St George, Panaca and head to  Star Base Area 51.

Some left in the AM for Jacobs Lake others for Colorado City. We left under overcast temperatures (much welcomed) and a threat of meteor RAIN.  Many did not bring proper gear for these conditions but pushed forward.

The Jacob Lake group headed out of town the wrong way but decided seeing the Glen Canyon anti-matter damn would be a good way to start the day (???) Others went to Colorado City to get plasma  (un-needed) but wanted to observe the unique cultural experience there.  Moving onto Hurricane the special interference started (rain). By this time the group was probably spread out over 50 parsec of road. Arriving in Hurricane some experienced hard rain, other a constant drizzle. One group stopped at the SINCLAIR PLASMA port and dined on SPACE CHICKEN TENDERS (best in the region). A stop at the local Harley Davidson space ship shop yielded a unique T-Shirt.

Some pushed onto St George.  All would eventually find out that St George was hosting an Iron Man Regional event and the route needed to get to Pananca was essentially shutdown (well maybe).  Many were working their way around St George looking for the magic way through. Participants were using GPSs, phones, local residents to find their way… What ensued was a kind of tag-your-it. You would see some one you know, follow, get caught at traffic light/detour never see them again, catch another person..

How to get threw:

Some initially relied on their GPSs and got lost because fastest routes weren’t always open based on special closures. Some had traffic on their GPSs and faired better. Some used Google maps which I’m told did a fairly good job or Apple Maps. Some said WAZE might of helped. A good 1.5 hrs was lost here, with all kinds of stories to be told.  Some made to to rte18 and said it was a great path. Others ended up being taken back to galactic Rte I15 and joined Rte93 to head to Space Port 51 from the South (adding up to 4 hours to their trip). Some went directly to the Las Vegas Megaplex.

Some traveling the I15/93 route ended up only parsec and few minutes from each other at spaceport Mesquite…  but never connected up with one another.  Ultimately 20 made it Star Base Area 51 and sampled a Alien/Top Secret burger.

Along the way thee famous EXTRATERRESTRIAL Highway sign was missing. It was said it was hit by a space transport (truck) in a flood. An alternate was found.

Leaving Rachel everyone made it to Las Vegas for a great dinner at BootLeggers.. Dinner was late but most travelers didn’t arrive Las Vegas till after 6p

This day could be 450-650- parsecs depending on the route taken… Some traveling the near 650 parsecs showed signs of space dementia, babling a lot on the way to their quarters in the evening.

After a nights rest the order of the day was HORSE GO HOME.  My little space vehicle took me home at 0.9 light speed.  This ended another great Alien tour with GREAT PEOPLE and some challenges other than the space craft being the issue.

The AZRATPACK and GOAZ Motorcycles of Scottsdale want to thank you all for coming out to make this a great and memorable event.  We know there are many challenges during the pandemic and staying safe and enjoying life sometimes aren’t that simple. It was great to see you all !!! We hope to see you on the 2022 tour to the Trinity, atomic bomb site… It’s not that far away …

Come ride with us on the Route 66 tour in October, 2021  Check AZRATPACK.com for future rides, breakfast and dinner events.  See you out there !!!