The AZRATPack was honored and flattered to be invited to Triumphs Immersion 2020 demo days in Tucson. The event was primarily held for industry influencers, bloggers and vloggers. The location Triumph picked was spectacular. They had everyone come to the Westin La Paloma in Sunny Tucson. Triumph flew people in from all over the country for this event and some people from Canada.

There was a nice welcome lunch with the ability to meet and greet several other people that were here. After lunch we all met out of the parking lot where the bikes were at and you got to go around and pick which bike you wanted to ride. The idea was to pick a bike, ride that for a while and then swap with somebody when we stop somewhere. That way you get to ride more bikes because we were going to be staying out riding for about 4 hours. I first chose the Rocket III GT. I was really impressed with this bike. It’s an extremely heavy bike but doesn’t feel that way when you sit on it or when you’re riding it. But don’t try to move it around with the engine off at a gas station, it’s very heavy. The bike seems to have a  lot of acceleration as you would expect for a 2500 cc motor. I was bouncing off the rev-limiter several times. The only thing negative I would say about the GT, and really is only a negative for me, or people of my stature. The GT has the pegs and foot controls in a forward position. There were not too forward where it was uncomfortable for me. However, the problem came in that my legs were stretched right to the Limit reaching those pegs and that meant that my leg was also resting up against the headers. That got pretty hot when I realized it was happening, I had to concentrate on keeping my legs spread so that they weren’t touching that. I talked to a couple other people and looked at taller guys that were on the bikes none of them seem to have the issue. Triumphs other version of the Rocket III has the foot pegs in a more neutral position. That would have been more comfortable for me.

At around the halfway point at one of our stops I walked around and asked a couple people if they’d like to swap bikes with me. One of the guys who was considerably taller than me wanted to swap. He was riding a street triple. After riding the Rocket 3 around and getting on the street triple I felt like I was going from a semi down to a kid’s bicycle. But I’ll say the street triple was a very nice bike it was comfortable, and performance was very good. We rode part of the way up Mount Lemmon, so I got to try it on some curves and it performed very well. I had a street triple many years ago and was not real happy with the way it rode or shifted. This bike was very smooth shifting was excellently smooth and a good amount of power.

After a nice day riding, now we’re off to dinner.  We all had dinner at a nice Italian restaurant here at the resort. More tomorrow.

D2 started off with a nice breakfast at Café Azul at the hotel. It was good to start the day off chatting with a few people about their rides the day before what bikes they like but they didn’t like and overall what they thought about some of those bikes.

When I got to the parking lot to choose a bike, I had planned on riding a Rocket III R to see how that was. But when I got there, they were all taken already. And all the people were already lining up on the Tigers to go out dirt riding. So, I chose a Thruxton RS to ride. I’ve never ridden a Thruxton and didn’t expect much. However, I had been hearing them the previous day out riding and thought they had a nice sound coming out of the stock tail pipe. Once we took off riding, I was pleasantly surprised. I found myself thinking I really like this bike. It seemed to have a really nice throaty sound, it had plenty of acceleration and torque. It was just a slight bit tall for me but all in all not bad. The ride took us out through some of the beautiful countryside south of Tucson. We got into some nice long straights where I could get some speed up and a few nice curves that we could feel how the bike did on them. We stopped at a public land farm just north of Sonoita. It was a spectacularly beautiful location to take some pictures. These were going to be pictures that would really flatter these beautiful bikes. I got a few nice shots myself then they lined a few bikes up with the nice mountains in the backdrop so we could take turns sitting on those bikes getting some nice shots by someone with a good camera. At this point people were swapping bikes and I looked around and try to find someone to swap with me but the only thing available was the rocket GT that I had written the day before wasn’t too interested in riding that again. So, I was enjoying the Thruxton so much I decided to just stick with that the rest of the way rather than switching on to a triple again. There were a few things on the Thruxton I was really surprised at. I mean it’s a Bare Bones Café Racer but still seems like could have had a few additional Electronics added. I mean who build the bike nowadays and doesn’t put Auto canceling turn signals on it. Seems like a small thing but one that agitated me. We headed back to the start location turned in our bikes said goodbye to everyone and picked up some really cool swag. I think this was a very good event and hope the Triumph decides are going to do it again. 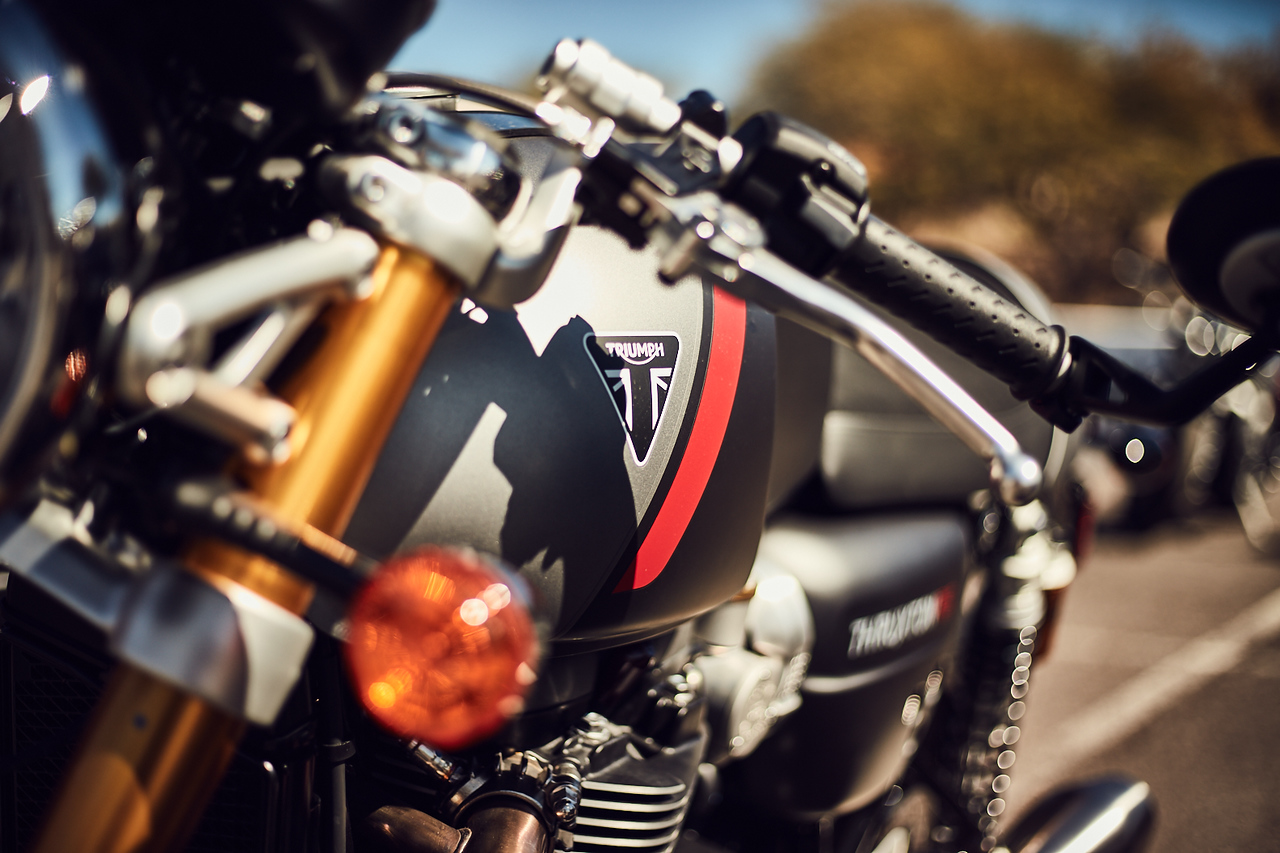 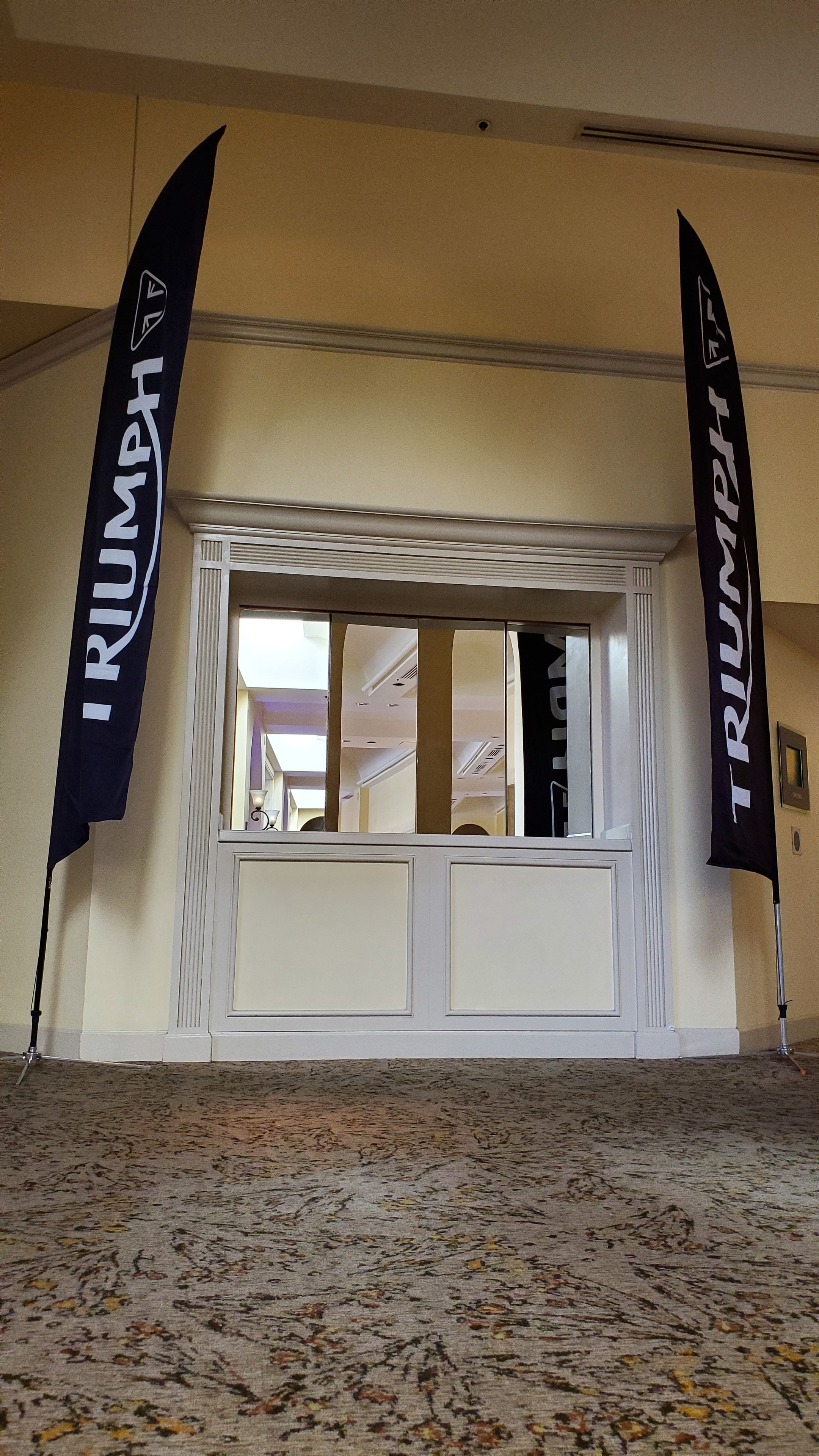 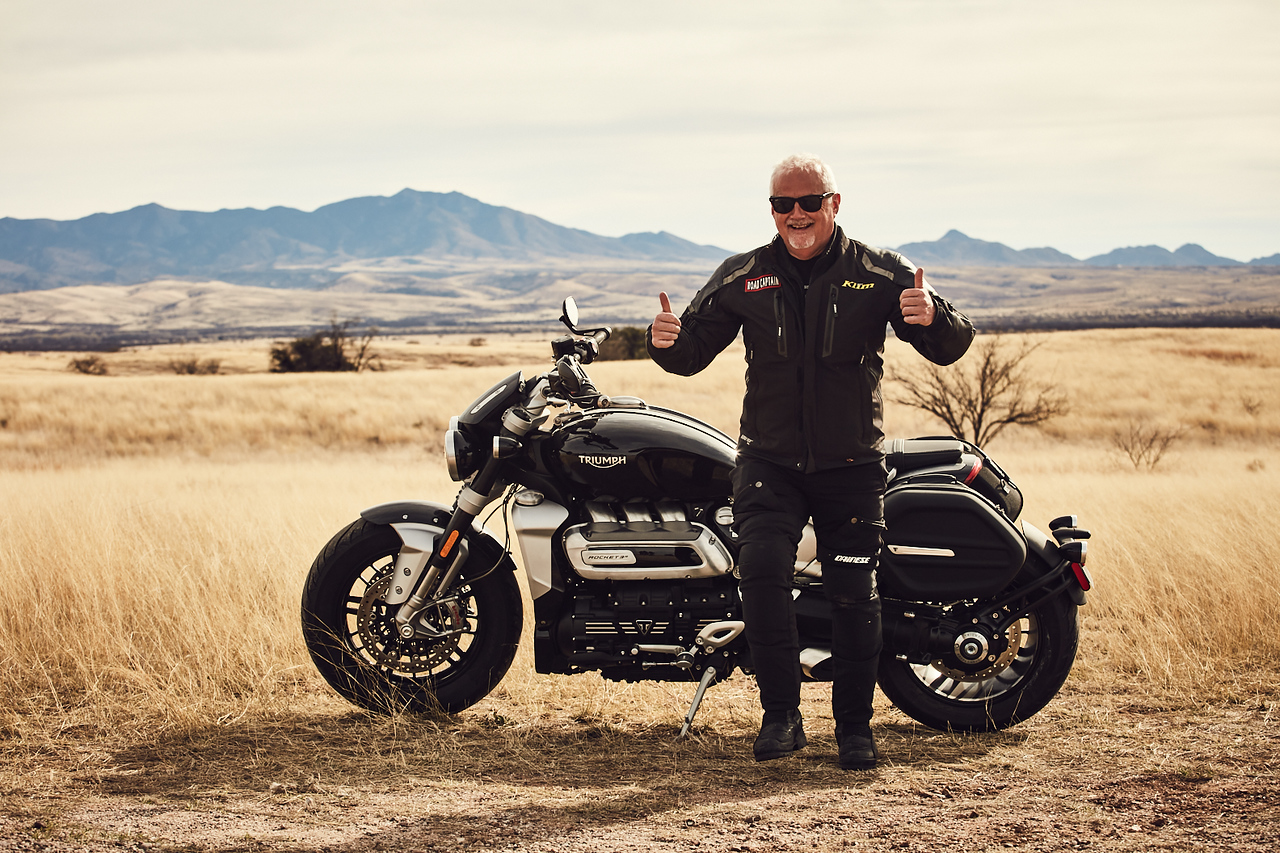 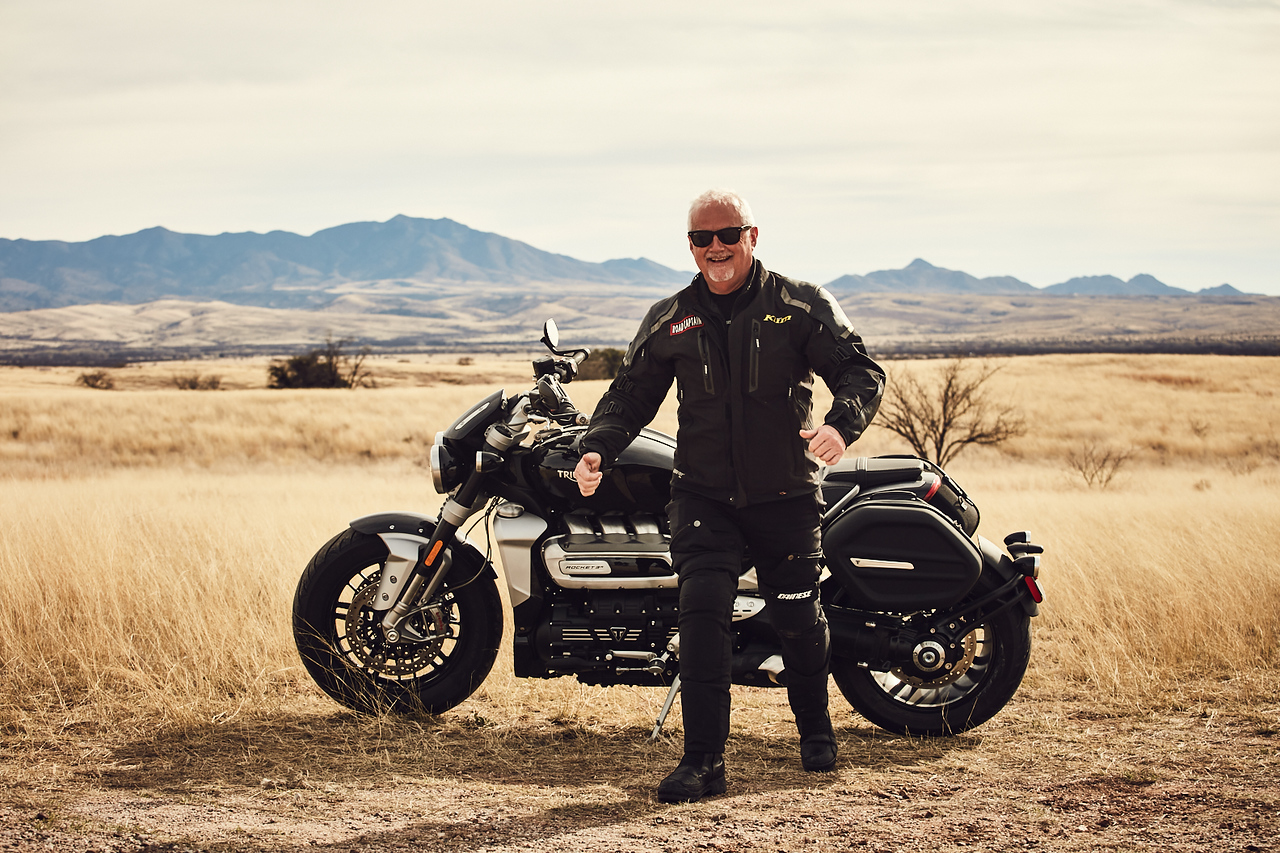 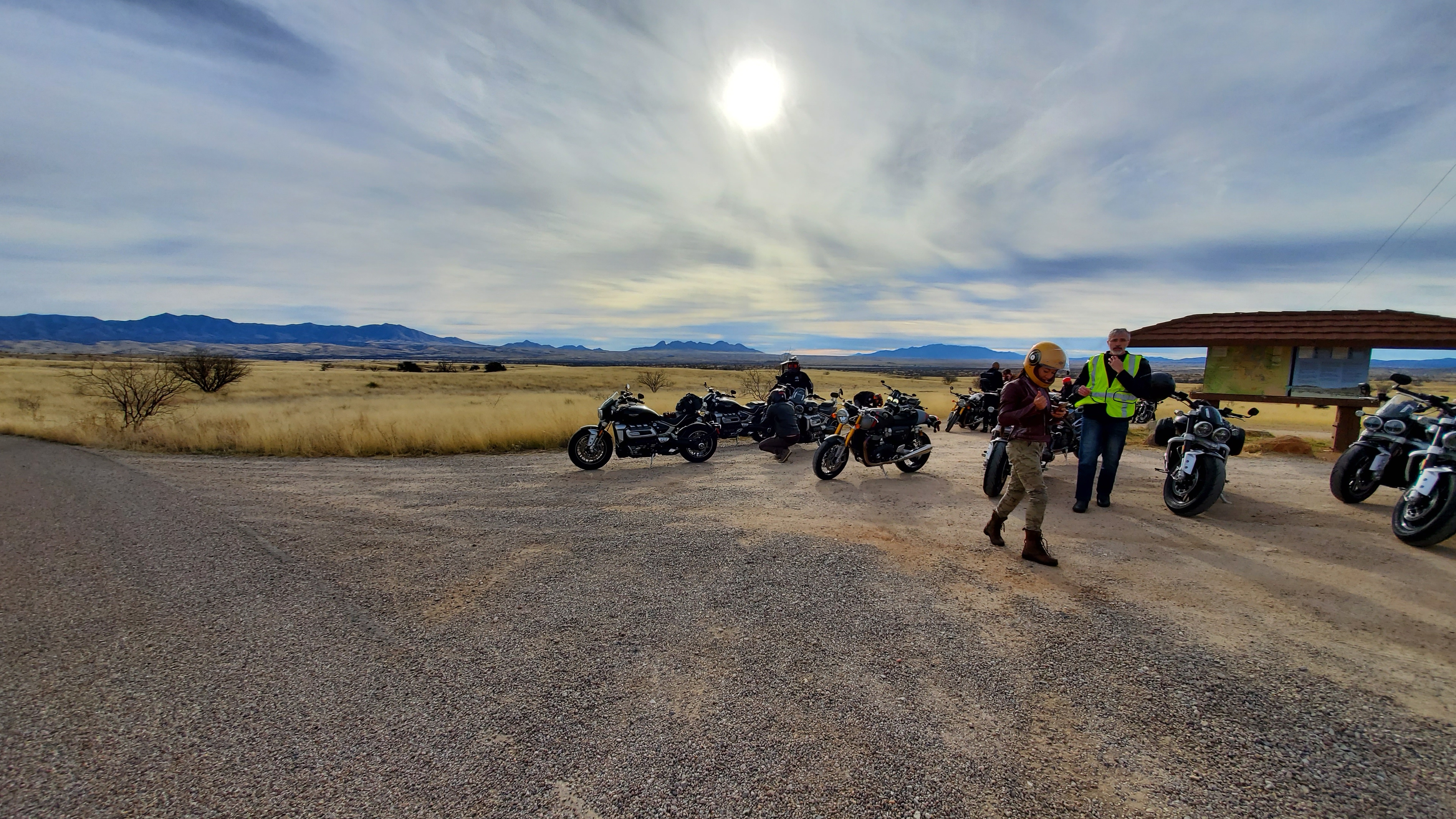