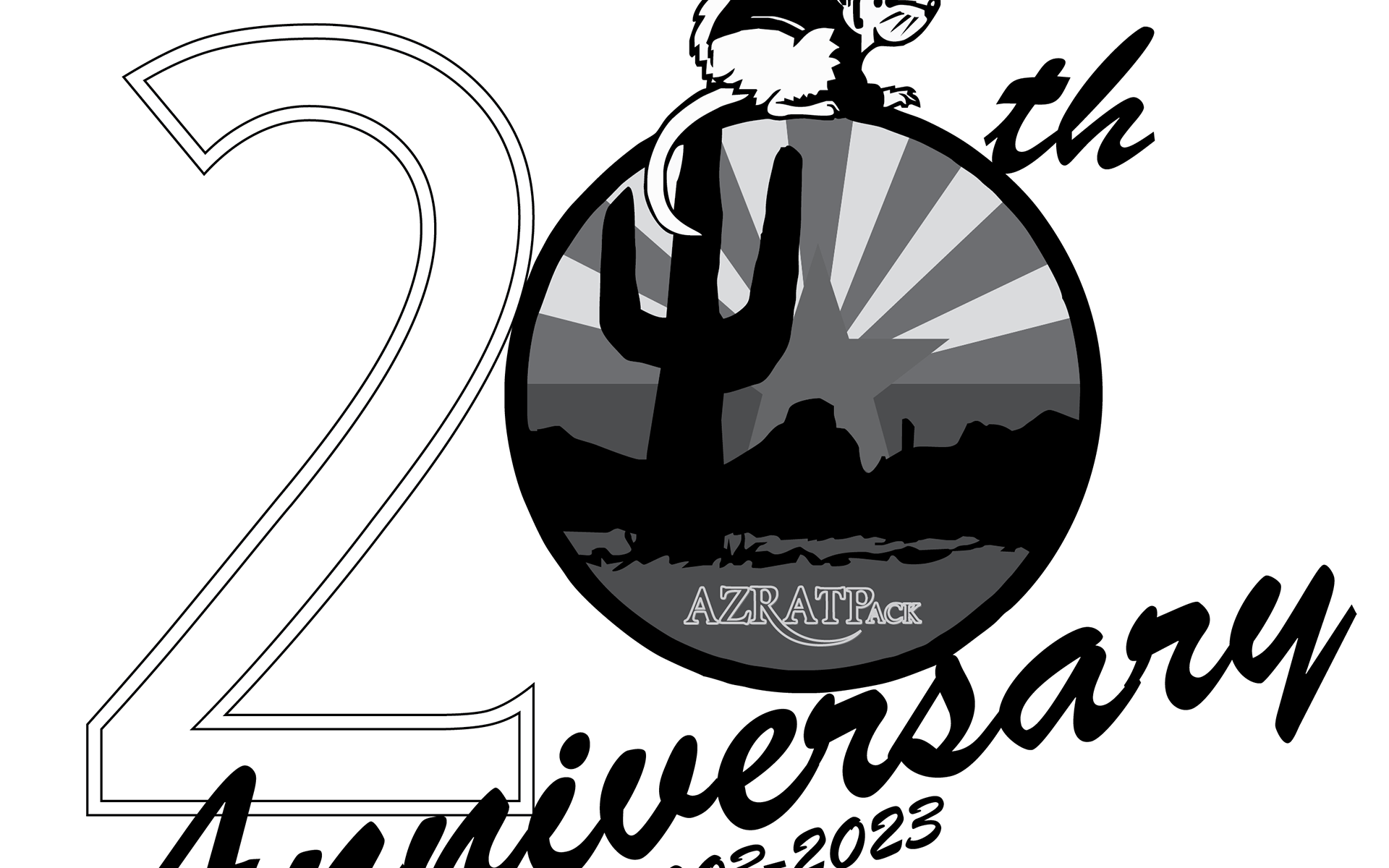 The title of my column this month is taken from my yearly summary of the club back when we were a Triumph owners club. Now that I’m completing my 10th year of being president and the AZRATPack going into its 20th of existence, here’s a summary of where we’ve been, where we are, how we got here, where we’re going and some other tidbits.

I first heard of the AZRATPack in 2003 while on a bus transporting me and other Ducati dealer representatives from Barber Motorsports Park in Birmingham, Alabama to the local airport. I was sitting with a group at the front of the bus which included Peter Kramer of Phoenix International Motorsports whom I knew as one of my customers from my days at Fast By Ferracci. He was telling the group about the new initiative that Triumph had started similar to that of Harley Owner’s Group and that he had started a local R.A.T. (Riders Association of Triumph) Pack in Phoenix.

Fast forward to 2005: I had just moved here and Dagame (DJ to many of you), took me out one night to meet up with the AZRATPack at a dinner/meeting at the George & Dragon on Central. DJ had bought my T595 Daytona and shipped it home to Gilbert a couple of years previous and had become one of the early members of the club. I believe the first ride I participated on with the club was a Roosevelt Lake/Winkelman Loop Ride on my MV Agusta Brutale 750. I continued to ride with the club sporadically over the next few years.

In 2008, I bought a Bonneville Black and started to participate a little bit more when time permitted. I became more active in the club around the time of my divorce in 2011. The club was going through a rough patch with lots of political BS and splinter groups when the president at the time stepped down. Right before this point I had volunteered to help out with the website since I enjoyed web design. As the president was stepping down, he asked me if I wanted to take over. I thought about it for a while and accepted. This was late in 2011. I officially became president as of January of 2012.

I learned a lot in 2012. Because of a couple of break off groups putting on rides either on or close to the dates we were doing rides, we’d always get about 5-10 people in attendance. Also, most of the riding groups were all going to the same places on the same combination of roads.

I had been working the parts counter at GO AZ Motorcycles since 2009 and had developed relationships with customers who’ve ended up being valued, personal friends. Since taking over the club, I started inviting them on AZRATPack rides even though they weren’t riding Triumphs. Those friends started bringing other friends. I started changing up some of the rides we were doing and turnout for our rides, breakfasts and dinners were starting to climb. Rodney, who I met through the dealership, was an instrumental hand at helping to get participation up along with being influential on how we changed up some of our rides.

In the next couple of years, the Triumph riders were becoming the minority as our participation numbers were going up. In about 2016 we decided to stop being a “Triumph owners and fans club” and become a Riders Club. The following year we formed our Board of Directors, incorporated and became a chartered club of the American Motorcyclist Association.

During this time, we transitioned from doing monthly rides, most of which were going up 89A or the Beeline along with some interesting overnighters. The monthly, almost weekly trips up Yarnell Hill or through Payson were getting a bit boring and repetitive. Turnout was starting to reflect this. We decided to put on bigger rides every other months so that our ride events would seem to be more special. This turned out to be a successful plan where participation rose and things got more exciting, especially for the organizers!

The club’s original sponsor, Phoenix International Motorsports, then located on 7th Ave (where Culinary Dropout/The Yard is currently), sold out to a group looking to open a second dealership and changed into Triumph Superstore. Not so interesting note: I worked in sales at their original Kawasaki Superstore in Goodyear for a week. In about 2010, the banks caught up with them and shut down. This left the club without a sponsor for about a year and a half. Sean Lind, the president at the time, negotiated a deal with GO AZ Motorcycles to sponsor the club in 2011. When I took over in 2012, GO AZ had an employee heading up the club, so their participation increased over time to the great relationship we have with them currently. By the way, my last day at the parts counter at GO AZ was in March of 2013 where I moved over to sales at a classic car dealer. I then returned to the GO AZ family in 2014 but at Spooky Fast Customs until 2020.

Twenty-Twenty. What a year and not in a good way! We all know what happened. For the AZRATPack, it was business as usual until early March. We then proceeded to cancel our social get-togethers and postpone our ride events in the hopes that things would get back to normal and proceed with our lives. But as time wore on, we kept moving things back until we ended up having to pull the plug on everything. 2020 was pretty much a total loss except for the three breakfasts, two dinners and one ride that we held early in the year.

Half of 2021 was more of the same, but at least we were a little more prepared with our expectations. We started holding a monthly Alien Donuts Saturday Social where we would meet up for coffee and donuts. Alien Donuts was located in Scottsdale at that time and had a decent amount of outside seating. This offered the chance for club members to reconnect. Our ride schedule re-commenced in June, holding our regular slate of rides compressed into six months. Soon, regular breakfasts and dinner events were being held again as mask mandates started to relax.

And here we are, 2022 and it’s back to business as usual! Because many of our lives were shaken up, there was a little bit of turn-over on our Board of Directors starting in late 2021. As of now, we have a solid group of five and are looking to expand to a full line-up of seven.

Moving into 2023 celebrating our 20th year of operation and my 11th as president, I hope many of you will come out and participate in our events this year, especially our 20th Anniversary Tour which will incorporate many of destinations and roads that we have traveled through the years.

See you on the road!