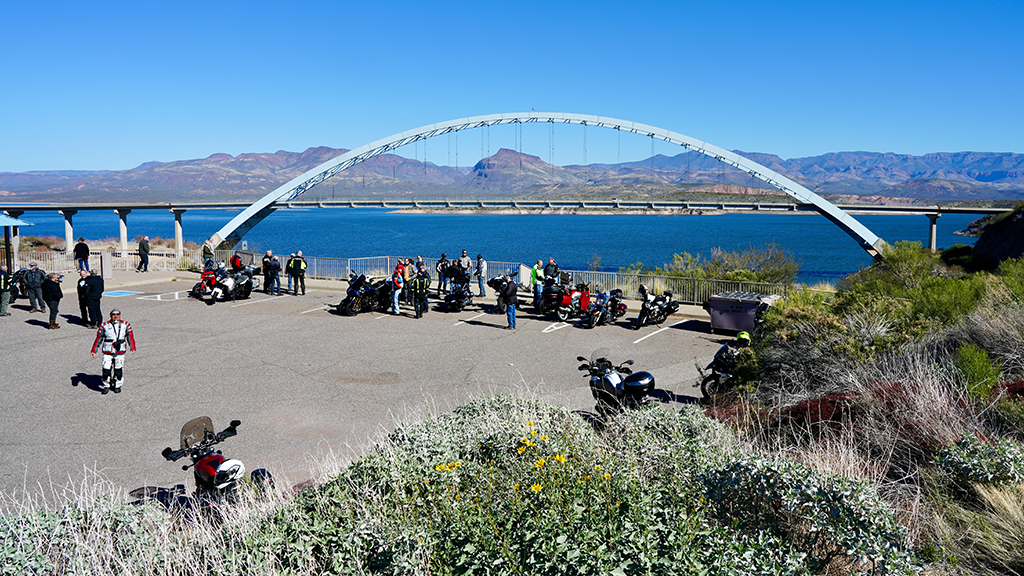 It’s been over a year since I’ve been on the road with the RatPack. It felt great to see old friends and new faces on our first ride of 2022! We welcomed new board members, Sebastian and Dean, and missed our fearless leader, Victor, as he couldn’t make this ride.

The ride started at GO AZ Motorcycles in Scottsdale, which as always, showed massive support for the Club. I led the rider’s meeting, and it was great to see all the eager faces ready to brave a somewhat chilly morning. With 20 plus bikes in attendance, I led the way out of the dealership around 9:45 am. Rodney and Stoops ran ahead of the group to set up some drone shots at the dam, and Dean, on his glorious Gold Wing, was the ride sweep. We didn’t know it then, but that Gold Wing, with its extremely comfortable passenger seat, would star later in the ride.

The route called for us to take Frank Lloyd Wright to Shea, and in what could only be considered divine intervention, we did not hit one red light until we made the left onto Shea! We took Shea to US 87 and stopped at the Fort McDowell Chevron to regroup before heading to higher elevations and US 188. It’s always nice to ride along Roosevelt Lake and take in the wonders of blue skies and blue water, and today was no different. Our next stop was the Roosevelt Lake Dam where everyone mingled, took pictures, talked motorcycles, and caught up in general. Check out the event photos to see all the group pics, including Rodney’s drone shots and videos!

As much as we enjoyed the lake, the ride wasn’t over yet. Everyone mounted up, and we continued on US 188 to US 60 for a lunch stop in Superior. Before we bask in the glory of lunch, we must pay homage to the undulating and twisty bits of tarmac between Miami and Superior. We had all different kinds of motorcycles on this ride, and I’m sure everyone found some enjoyment here. On my freight train K1600 GT, it was like an explosive magic carpet ride.

Our lunch stop was in Superior at the Silver King Smokehouse & Saloon. This was the former Porter’s Steakhouse location where we’ve enjoyed lunch in the past. As we pulled into Superior, ready to satiate our hunger, I parked across from the Silver King and turned around to see Dean performing sweep duties like a seasoned pro. Perched on the passenger throne of Dean’s Gold Wing, was fellow Board Member, Sebastian! In a wicked twist of fate, Sebastian’s motorcycle deceived him and left him gas-less on US 60. Thankfully, Dean was on the job and brought him in safely. They found a gas station down the road and circled back to his bike; eventually returning to Superior and the Silver King for lunch.

After enjoying a great lunch, everyone made their way west back to the Valley. It was a great way to kick off the 2022 ride season, which promises to have more incredible adventures and camaraderie! Looking forward to seeing everyone at our monthly club breakfast and dinner meetings, and especially on the Southern Arizona Tour in late April/early May!