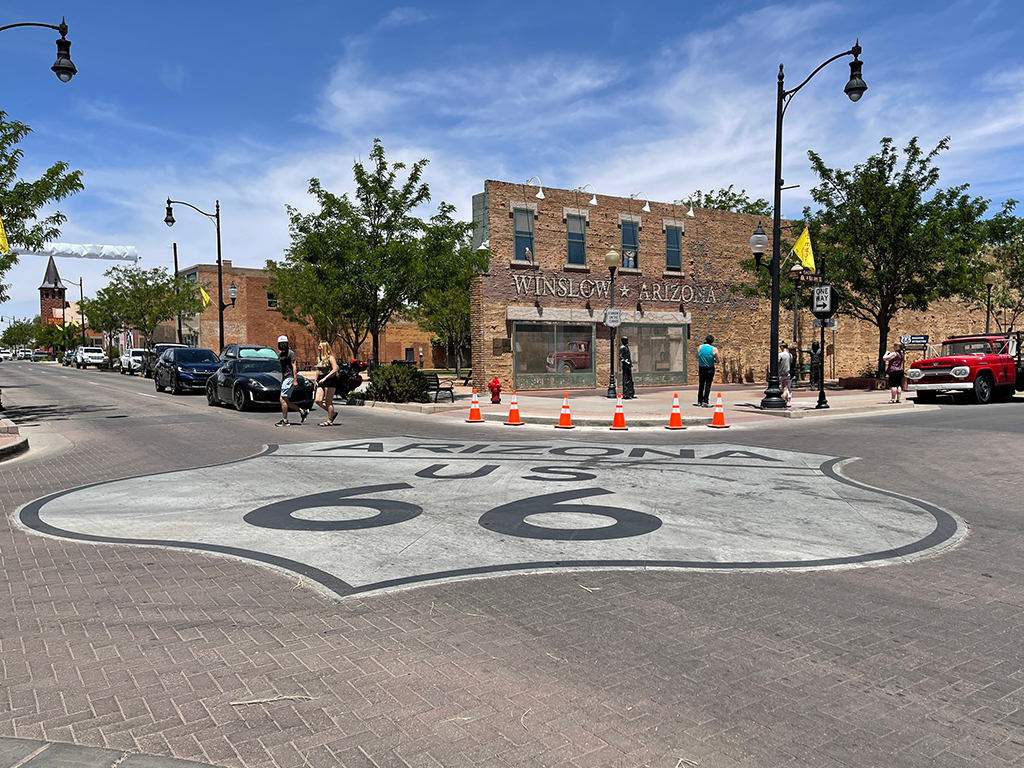 Another great trip along Route 66 in the books! This year we took an easterly heading into New Mexico which we’ve only done once before. Though we didn’t log in many miles on actual Route 66, which is very difficult in this part of Arizona, we did see many of the sites people traveling the Mother Road would have veered off to see plus we managed to avoid I-40 for the most part!

We started our day with the warm hospitality of GO AZ Motorcycles in Scottsdale with coffee and bagels. After a brief rider’s meeting, we were off towards the Beeline to our lunch stop in Winslow. We arrived a bit ahead of schedule which allowed many of us to walk around and live out Take It Easy by the Eagles by “Standing on the corner in Winslow, Arizona.” I’m sure we were all a “fine sight to see” but I’m still looking for the girl in the flat bed Ford. Pass along my number if you run into her… We all sat down to a wonderful lunch at the Turquoise Room at the La Posada Hotel just after noon.

After lunch and a gas stop, we continued north on SR87 then east on 264. We were traveling through the heart of Navajo Nation and was interesting to see the kind of scenery they get to see every day! We then crossed the state line into New Mexico and descended upon historic Gallup where we were stopping for the night at the El Rancho Hotel where many movie stars have stayed throughout the years while they were filming westerns. Each of the rooms are themed and named after a classic, famous actor. Rodney and I stayed in the WC Fields room which was quite comfortable! Dinner was at the bar/restaurant just next door while breakfast the next morning was in their regular sit-down restaurant.

It was a cool Saturday morning in the low to mid 50’s! Thankfully I packed my heated vest! I had it cranked for most of the morning and turned it off at the first gas stop at about 115 miles! We logged in some more miles in Navajo Nation and made a stop at the 4 Corners Monument where Utah, Colorado, New Mexico and Arizona meet. After a photo op and checking out the Native American vendors, we set off to Canyon de Chelley.

Unfortunately, I was having some trouble with my new GPS (probably user error), so I missed a turn that would have routed us along the edge of the canyon. Instead, we made the turn south toward Chinle on US 191. The consolation was that the scenery was other worldly in many parts looking more like Mars than what we’re accustomed to! When we arrived in Chinle, we then turned east towards the canyon then north to the Antelope House Lookout where we stopped and explored. The views here are breathtaking to say the least. There’s a short, easy hike from the parking lot to the lookout points. The greatest thing of all is that we pretty much had the place to ourselves! I’ll remind you it was a Saturday at mid-day with mild temperatures! We then proceeded back to Chinle where we gassed up and grabbed a quick snack then headed to our next stop in Holbrook where we would stop for the night.

Most of the group settled into Brad’s Desert Inn while I checked into a teepee at the historic and iconic Wigwam Motel. Luckily, we were off the road early enough so that we could all settle in our rooms. I grabbed a shower and then walked around taking pictures of Holbrook where it looks like time has stood still since the mid 1960’s! We all then met up for dinner a Butterfield’s Steakhouse for a meal and celebrated Helen’s birthday!

The next morning, everyone was on their own schedule to ride home. My intention was to leave at 5:30 am but was a bit too comfortable and ended up leaving an hour later. Once I got myself in gear, I filled up the Harley and headed to the famous Holbrook dinosaurs for some pictures. I then proceeded to head home via Heber with the heated vest cranked once again! I stopped for an excellent breakfast at the Payson Airport before rolling the rest of the way to my final destination in the South West Phoenix Valley. I ditched the heated vest after breakfast where the temperature was borderline for me to get chilly. That ended as I descended into Fountain Hills where someone forgot to close the door on the oven!

Thanks to everyone that came out and made my first ride of the year a memorable experience! I hope to see everyone at our future breakfasts and dinners to catch up and hear about your ride home! Enjoy the photos below!